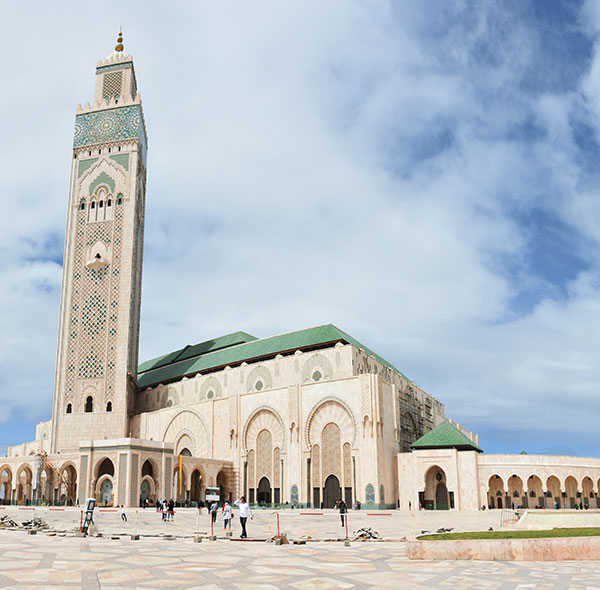 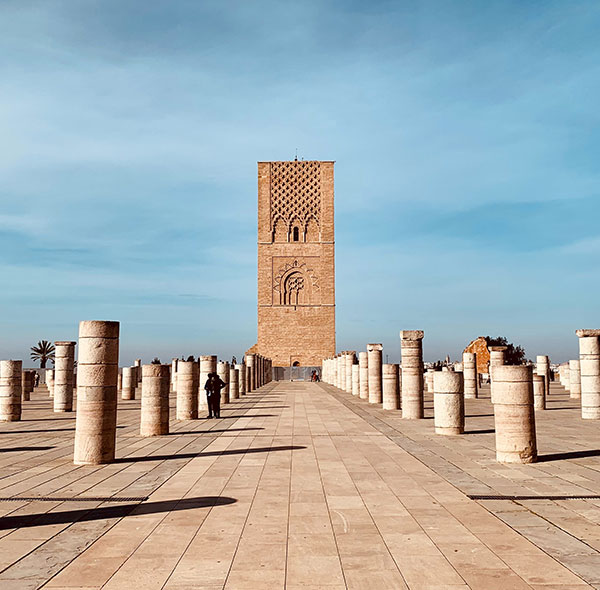 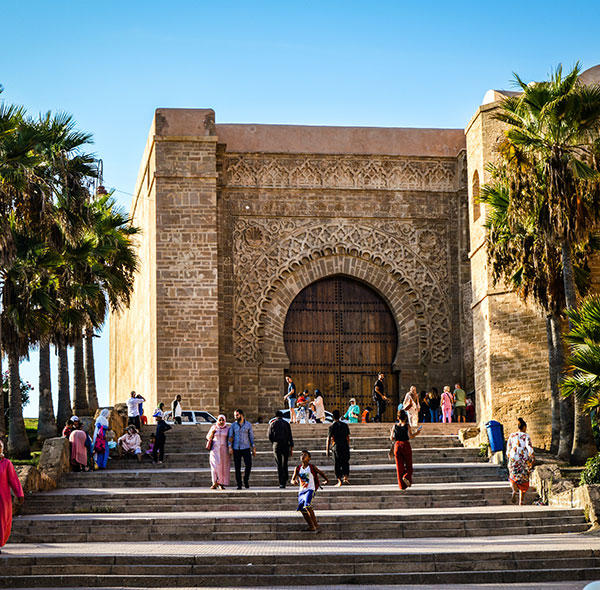 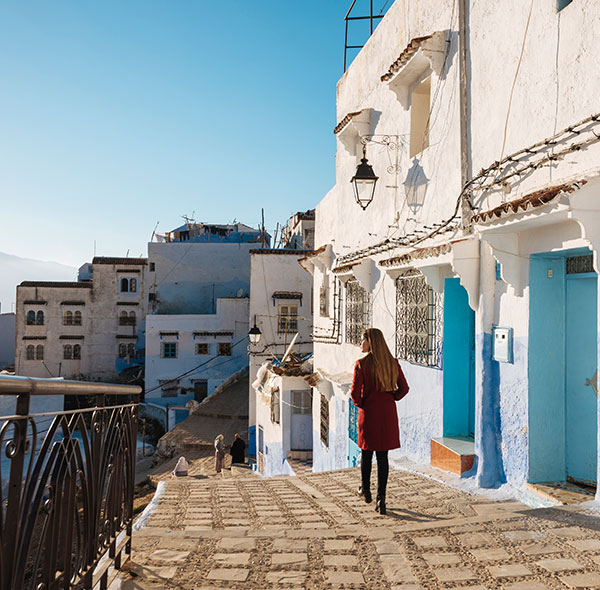 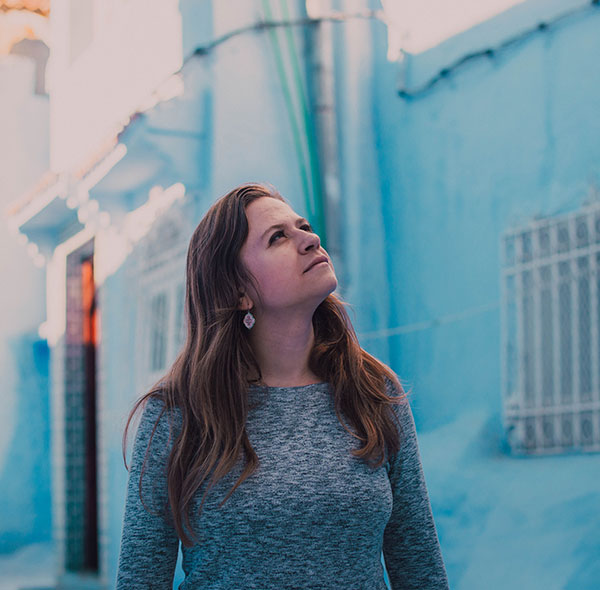 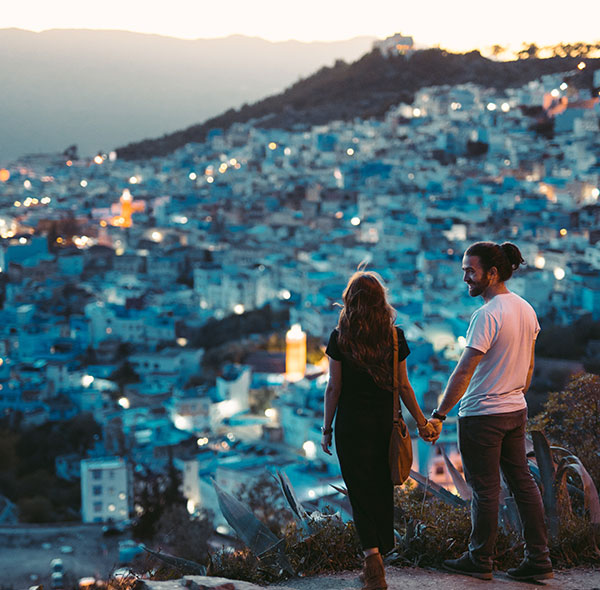 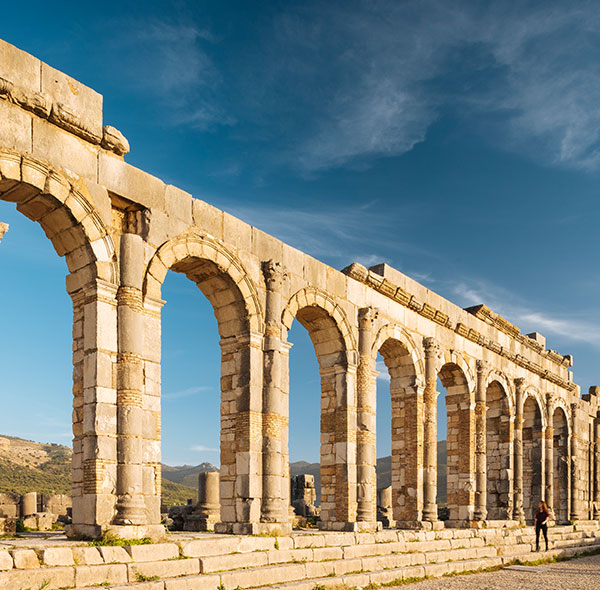 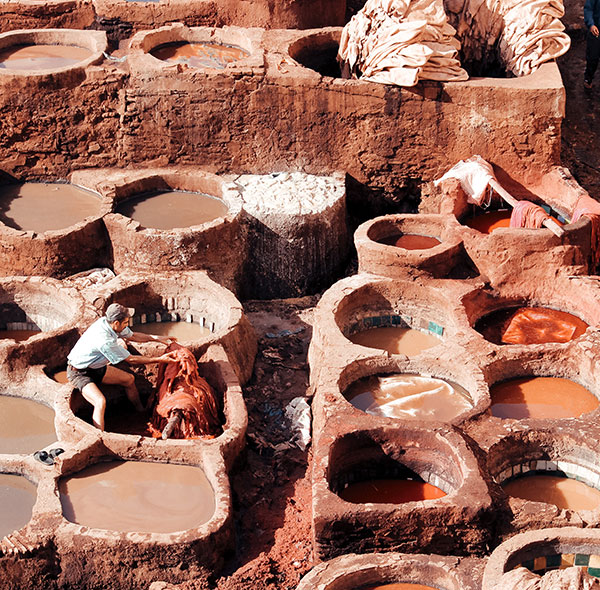 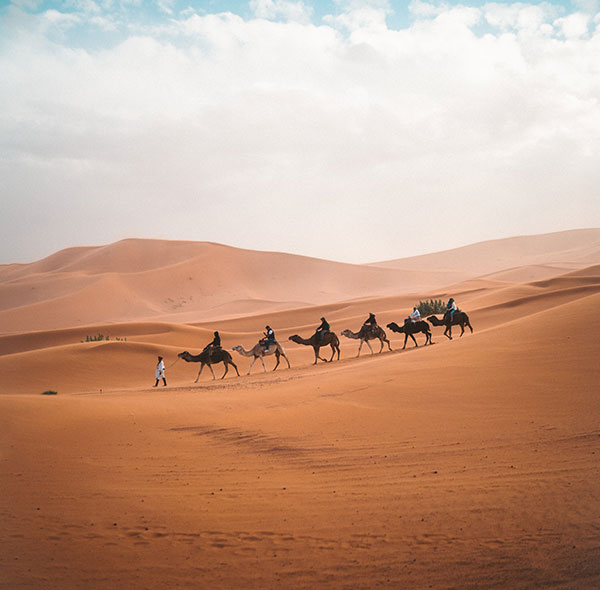 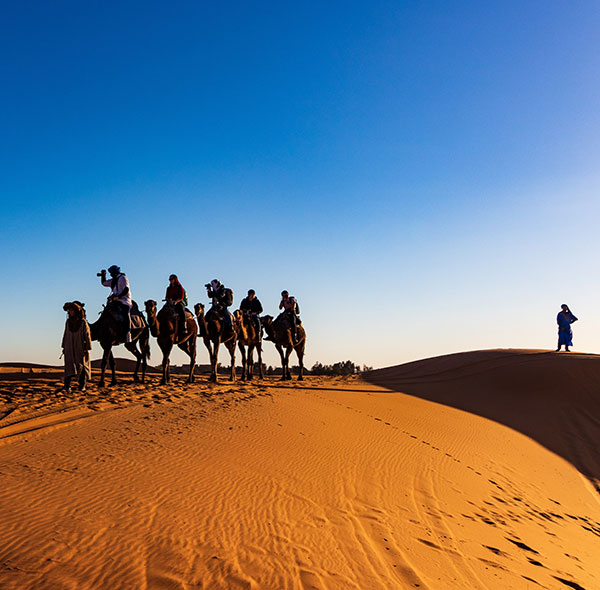 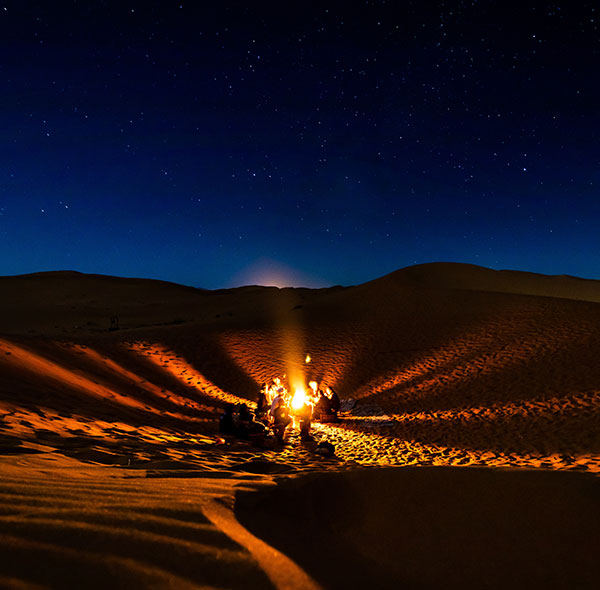 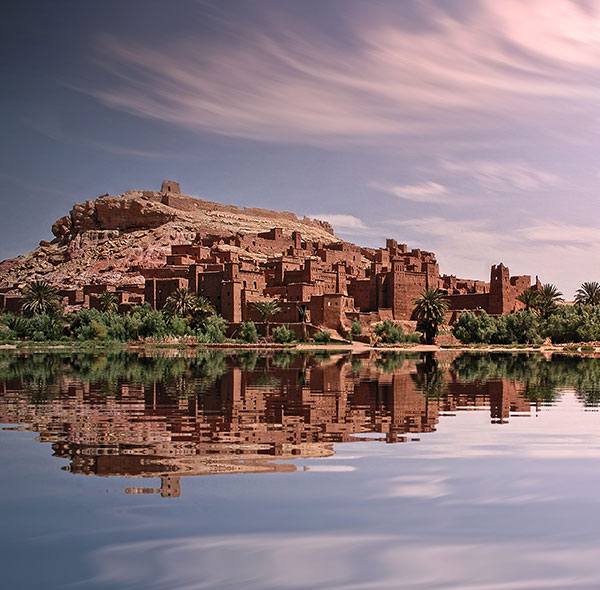 Our 7 days tour from Casablanca allows you to spend a week in Morocco. In these 7 days and 6 nights, you will see some of Morocco’s most magnificent locations. You will get the opportunity to see Hassan II, the largest mosque in Africa, beginning in Casablanca. Then the monuments of Rabat, Morocco’s capital, emerged. Explore Chefchaouen, the renowned blue city. Travelers will also spend a night in the heritage city of Fes after visiting the Roman ruins of Volubilis and Meknes, the capital of the Ismailis.

In addition, during your 7 days tour from Casablanca, you will explore Merzouga in the Sahara. You will ride camels and spend the night in a desert camp in the midst of the dunes. Saharan sunsets and sunrises are spectacular. Visit the Todra and Dades gorges as well as the Ait Ben Haddou Kasbah. On this tour of Morocco , you will traverse the High Atlas and the Tizi-n-Tichka pass. Finally, we reach Marrakech, our final destination and the end of our 7 days Morocco tour. We will transport you to your accommodation.

Anytime is a good time to begin our private tour from Casablanca, which will take us all across Morocco. Take a chance and explore the genuine culture of Morocco with people that are enthusiastic about their own country.

On the first day of the Morocco tour from Casablanca, we will meet you at your hotel or at the airport. We will begin by visiting the Hassan II mosque, which overlooks the Atlantic Ocean. The most important mosque in Morocco. Then, we will make brief stops at many monuments in Rabat, including the Hassan Tower, before proceeding to Chefchaouen, the "blue city." Finally, spend the night in a traditional riad in the Medina.

Day 2: A Day Off to Explore Chefchaouen
On the second day of our Imperial Cities tour from Casablanca to Desert, you will be free to explore the blue city at your leisure. After breakfast at your lodging, you can enjoy the beautiful city of Chefchaouen, Morocco's most popular tourist destination. The blue color that paints the Medina's walls in many hues of blue is Chefchaouen's most noticeable characteristic. Once you've reached the Medina of Chefchaouen, you should begin your ascent to the "Ras El Maa Waterfall," a famous waterfall on a mountain from where you can overlook the majority of the city and its hilly landscape. On your route to the summit, you will pass the following monuments and iconic structures, such as Place "Outa El Hamam," a tranquil area surrounded by cafés and restaurants. In Chefchaouen, the "Kasbah" from the 18th century, an extensively repaired walled castle with a magnificent garden, can be seen in the town center. However, your journey would be incomplete if you did not see the 15th-century "Grand Spanish Mosque." Spend the night at Chefchaouen.
Day 3: Chefchaouen - Volubilis - Meknes - Fes
Following breakfast at your riad, you will depart for Fes via Ouazzan and the Roman ruins of Volubilis. Then, after another couple of hours on the road, you'll arrive at Volubilis, a remarkably preserved Roman city that dates back to 225 BC and is home to some of the most stunning mosaics in all of Morocco.
You will have a guided tour of the monument and certainly learn a lot about the Roman Empire.
The next destination is Meknes, the Ismaili capital of Morocco. Meknes is home to the intriguing Bab Mansour Gate, built by Sultan My Ismail; the granary; the Sahrij Souani, used for irrigation and cultivation; and a visit to the Mulay Ismail Mausoleum.
Afterwards, we continue to Fes, the cultural capital of the country. Staying the night in a beautiful riad in the heart of the medina is a dream come true.
Day 4: Fes Sightseeing Guided Tour

You will begin your tour of the most historically and culturally significant city in Morocco after breakfast. In Fes, the "spiritual capital of Morocco," the architectural medina will be explored. Our guided tour of Fez includes the Jewish Quarter (Mellah) and the Dar El Makhzen, or Royal Palace, with its stunning mosaic architecture and golden doors. In the eleventh century, the famed Chaouwara Tanneries, the city's largest leather workshop, were created. The Kairaouine Mosque (the ancient institution of Islamic studies) and one of the world's oldest universities are closed to non-Muslims, however the courtyard of the mosque may be viewed from the gates. The Najjarine Marble Fountain and Al-Attarine Madrassa is a religious school with some of the most impressive examples of Islamic architecture. The Bou Inania Medersa is one of the most aesthetically pleasing places of worship in Fes.
There will be enough time to have lunch at a local Moroccan restaurant. The mosaics of the Bab Boujloud archway change color from blue on the outside wall to green on the interior wall, allowing you to recognize the sacred color of Islam. Meander around the medina's streets and markets. Later, we will transport you to a high position with a magnificent view of the medina of Fes El-Enormous Bali. In the same riad in the medina for both supper and lodging.

Our journey south to the desert of Merzouga through Midelt and Errachidia will begin after breakfast. Your initial destination will be Ifrane, also known as "the Switzerland of Morocco." Via Midlet and the Ziz Valley, one may reach Merzouga. You will catch sights of the Middle Atlas and Higher Atlas mountains during this excursion.

After that, visit the largest cedar forest in Morocco, where you will have the chance to observe Barbarian monkeys. As you near the city of Errachidia, you'll notice that the landscape changes, revealing traces of the desert. Then, after lunch in Midelt, you will continue your drive in the magnificent Ziz Valley, stopping along the route for panoramic vistas.

Arriving at Merzouga at the end of the day, you will be greeted with a drink of mint tea before riding a camel to the tallest sand dunes in Morocco to watch the sunset and spend the night there in a desert camp.

It's possible that the sunrise you see after a night spent in the desert and a hearty breakfast provided by your camel guide will be the finest sunrise of your life.

Next, you will quietly camel travel back to your starting point while savoring the ever-changing splendor of the Erg Chebbi dunes as the day develops. You will meet your driver and depart for the Tinghir and Todra gorges, Morocco's tallest and narrowest canyons. Here, you will have the chance to trek along the valley.

Then, we will travel through the Dades Valley, where you can witness the magnificent sand castles and the incredible rock formations known as "monkey toes." The last night will be spent in a riad or hotel in the middle of the gorge.

Following breakfast, we will travel over the Dades Valley to our next destinations, Kalaat Mgouna and Ouarzazate. Because the path through Dades Valley is known as the Way of a Thousand Kasbahs, you will have several opportunities to shoot some of the greatest photographs of your journey.

Furthermore, we will stop at Kalaat Mgouna, often known as the "city of roses," to acquire rosewater, which will leave your linens smelling fresh long after the trip is finished. Then proceed to Ouarzazate, also known as the "Hollywood of Africa."

Then, on this 7 Days Tour from Casablanca, lunch will be at the renowned kasbah of Ait Ben Haddou. This is the most renowned "fortified town" or ksar/kasbah in Morocco, located in the Draa-Tafilalet region of southern Morocco in the province of Ouarzazat. This ksar, or walled adobe hamlet, is, to say the least, interesting. Numerous cinematic classics and old Moroccan structures have been filmed there.

We'll keep driving over the beautiful Tizi n' Tichka pass (2260 m) in the High Atlas Mountains. At the women's cooperatives, you can learn how argan oil is made before we drop you off at your hotel in Marrakech, where the tour ends. 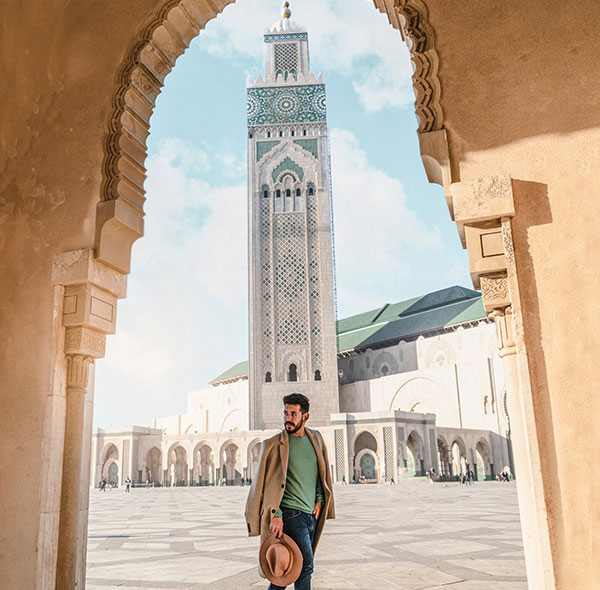 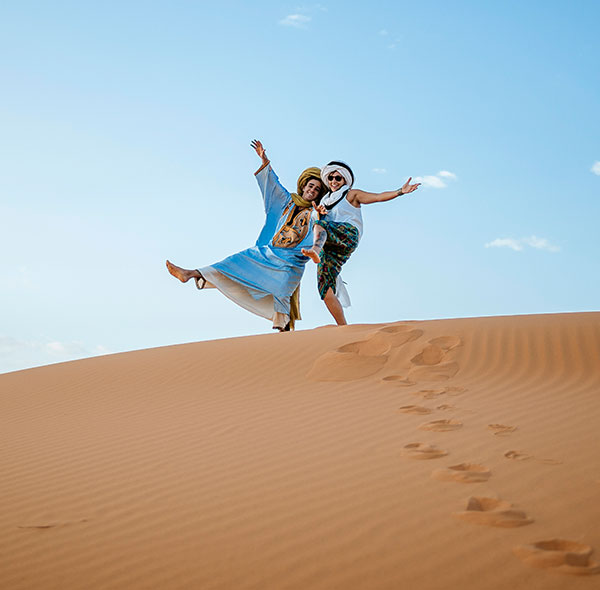 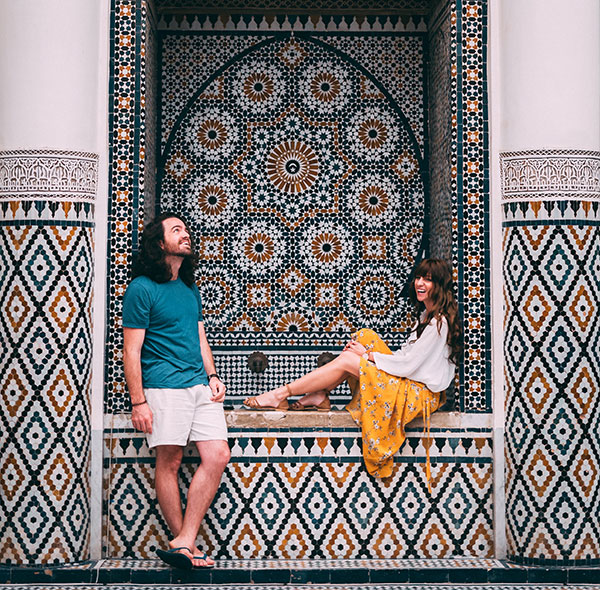 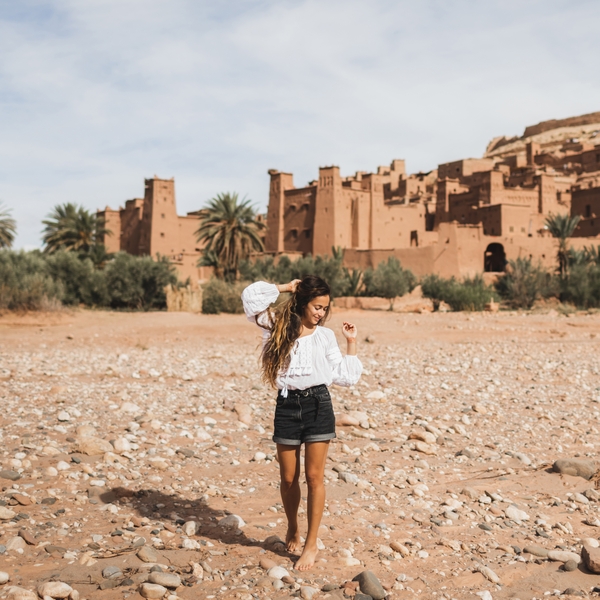 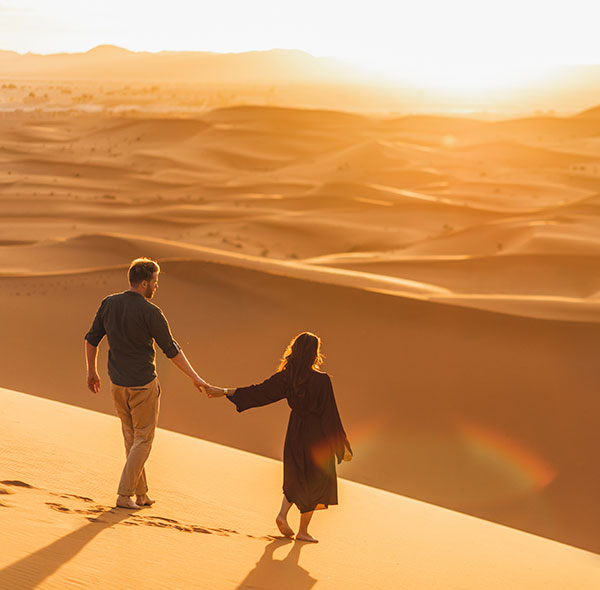 6 thoughts on “7 Days Tour from Casablanca” 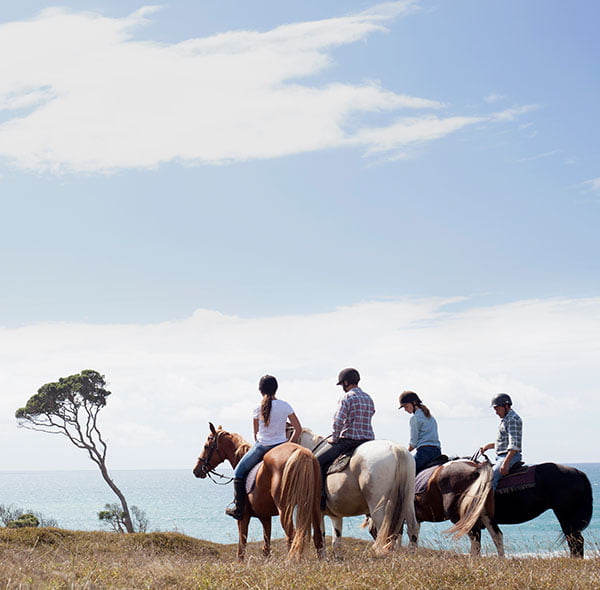 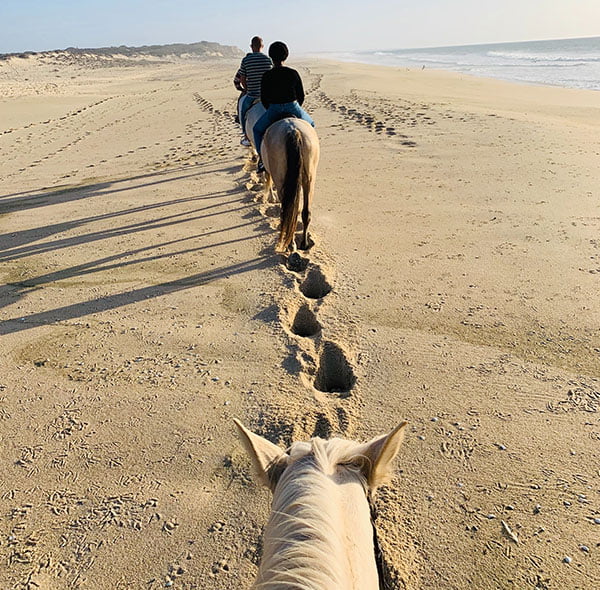 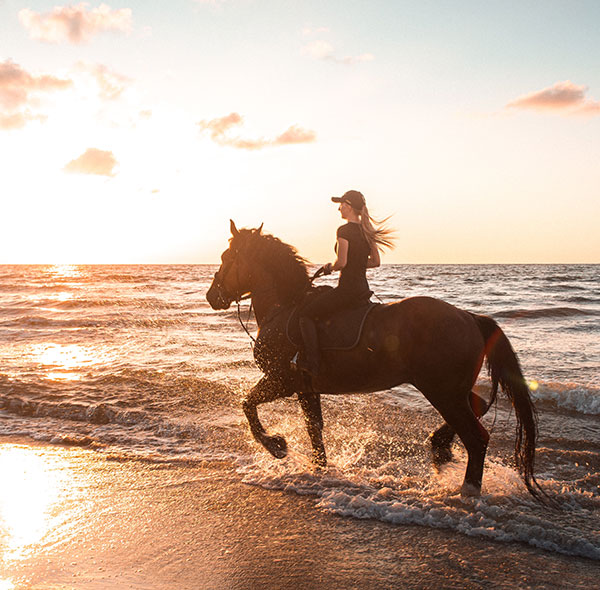 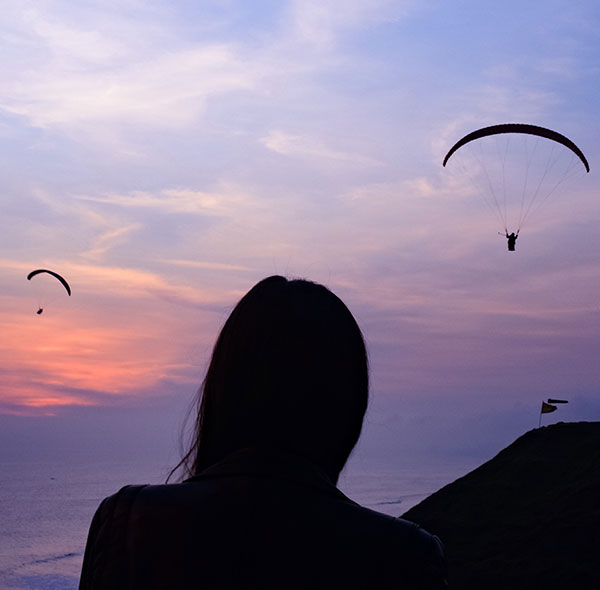 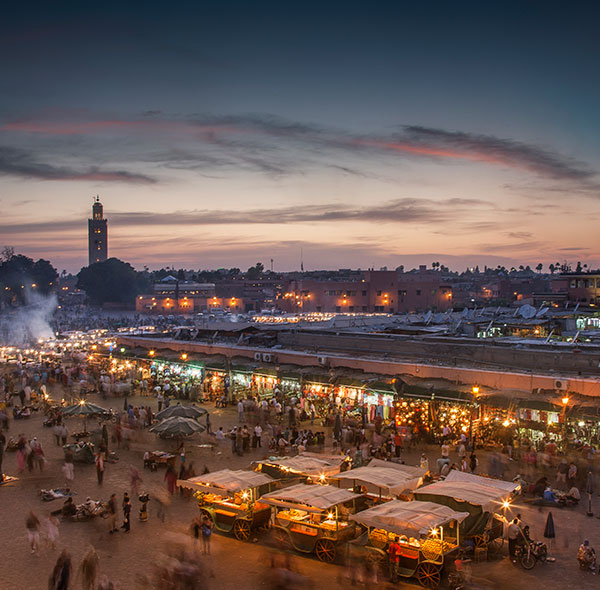